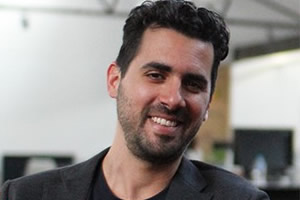 Although I’m a tech guy, a geek, a nerd, etc.. I’m a person’s person. I love interacting with others, the ones I work with, the ones I see during my commute or hang during the weekend (and quite often they’re the same). The concept of “work-life” is subjective, as in if you love what you do, the people you work with, living the life you choose, you will have a well balanced life through one day, one year and throughout your entire life.

2. What are you most excited about in the digital and tech space?

For me, the concept that ideas are far behind than technology.

If you take Uber or Airbnb for instance, they’re just ideas, using 10yo technologies (mobile, GPS and data). Softwares are really the biggest disruptors of our time.

Why this excites me? Because it means a 10 year old kid on a garage anywhere in the world can help the entire planet to have a better life! It’s just a matter of having that “sparkle” in your brain.

We’re limited by our own imagination, so find the vision that moves into your core, that brings tears to your eyes, and make it happen.

3. If you were a piece of technology, what would you be?

In a post “wearable” world, I’d probably be a “insideable”.

More specifically a non invasive BCI (brain-computer interface), which is the tech able to take us to the reality 2.0 once promised by VR (minus all cables, plus all your 5 senses).

This is super important. If you think how most of us interface with a computer, using our 10 monkey like fingers, typing 40 words per minute, it’s super slow. Precisely 200 bytes/minute bandwidth for a very good typist. To keep it in context, Elon Musk’s Neuralink promises 5 GB/second interface, and that’s what I’d be. A BCI.

There are so many!

In more recent years, I really enjoy Bill Gates’ quote stating that "The future will surprise the pessimists”.

Or back in the 1900 when philosopher Marshall McLuhan said "Technology is the exteriorisation of our nervous system!”, brilliantly explained by the futurist Jason Silva on how we have created this symbiosis with our tools since when we left the cave, took a stick from the ground to get fruit from a tree. That’s technology extending our reaches, like a web for a spider, or a nest for a bird.

Or you could go back to Heraclitus of Ephesus in 500 BC (2.500 year ago): "The only constant is change, and the rate of change is increasing”, which is super current, meaning that for business, standing still equals death, and the only way to succeed is to be constantly experimenting and innovating.

5. Music: what's at the top of your playlist?

6. Look into your crystal ball - what do you see?

Not going into specifics such as AI, VR, AR or BCI, broadly speaking I see in the short term much less unhappy people, specially at work places.

Although many may think that technology will bring unemployment, I think the the opposite. Technology will reduce the cost of labor and enable us to do more, better and cheaper instead.

Amazon, for instance, in 2016 grew its robot workforce by 50%. Far from firing 50%, they increased human employment by around 50% in the same period of time. Perhaps without it things would take lots more time, lots less speed, fewer packages shipped, higher costs, lower earnings, no growth, etc..

So, technology may teach us all the lesson of our lives: jobs as we know it are for machines.

In the middle term we might dive into biotech, which will allow us to engineer our own food, live longer, update our biology, reverse ageing. That’s human 2.0, Darwinism evolution in hyperspeed!

Right now, the average life span increases by 3 months per year. The increase itself is increasing and in 20 years there will be more than one year increase per year (by then we will have colonised Mars already).

Long term? Well, maybe Nanotechnology allowing us to manipulate matter at the level of the atom, so the physical world will be literally programmable. It will be an era of abundance, “as much as I want of whatever I need”.